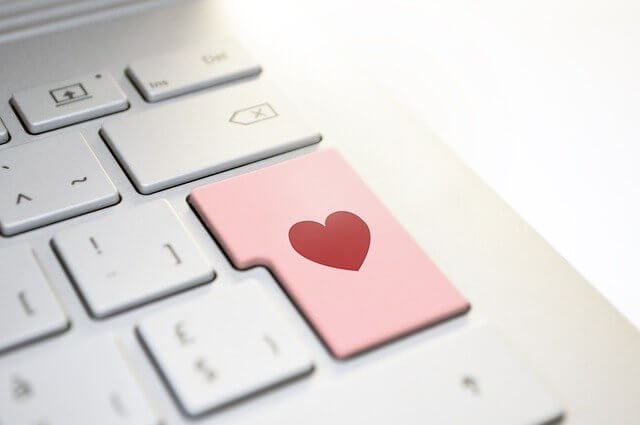 Oh I hear you…I really do. I felt the same way that you are thinking. But my opinion changed when one night at a party I met two separate couples who had met online and have been happily married for several years. While I sat there, alone again, one of the wives explained to me that online dating should not be looked upon as a desperate plea ~ as was my opinion on the subject ~ but as another option to meeting someone. “Just add it to the mix of places to meet your match, among friends setting you up, work, or at a bar.”

And I had to be honest with myself, my luck on either of those options had turned up by me sitting alone at a party. I work from home, only twice had I ever been introduced to a friend’s friend, and the couple of times that a guy even approached me at a bar, came with two unforgettable events, literally. One guy used a really classic pick up line. Are you ready for this? Because it’s good! “Your eyebrows are pretty.” Wait…what? You couldn’t have thought of something better to say? I’m sorry, that just doesn’t quite work for me, maybe your next attempt you should try dropping the ‘brows’ part of the word and not slurring your words. Another time when I attempted to tell a guy I wasn’t interested, I practically needed a bodyguard to ward him off! Online dating was looking like a very viable option.
Oh sure, it can be tedious at times and there are the quirks like:
When I eventually sat down to write out my profile, I found that I became really clear on who I was and what I was looking for, which got even more specific after reading profiles of prospective suitors.  Online dating is like being in a grocery store and figuring out the type of ice cream flavor that you are and the flavors that you love. I think I’m Rocky Road ~ some yummy chocolate, a marshmallow soft side with some crunchy nuts that make me really interesting. I might like Moose Tracks ~ a little vanilla flavor, with some smoothed out nuttiness and swirls of yummy chocolate fudge. Or maybe Caramel Macchiato ~ swirls of coffee & vanilla with ribbons of golden caramel. Maybe even Cookies & Cream or Black Cherry. I haven’t quite decided.
But if Vanilla ice cream sends me a message, and I know that I don’t like Vanilla ice cream, I can simply say, “I wish you the best of luck on your search,” or simply not answer. There’s no awkward confrontation and no need for a body guard to protect me from the backlash of a ‘no’. I get to pick and choose who I want to talk to. I get to be in control. I ask my prospects before giving them my number if they’ve read my entire profile ~ How do they feel about my daughter living with me and the possibility that my son could at any time? Are they spiritual? Are they open to growing in this area as I am? If I never hear from them again, well it wasn’t meant to be in the first place, was it? I haven’t stood in front of my closet for hours trying to figure out what to wear. I’m sitting at my computer in my sweats and have the answer. And that answer is okay with me.
I do keep myself protected, just as I would dating someone I met somewhere else. My screen name does not include my name ~ so I choose who and when I give them my name and when I do it does not include my last name. I don’t post pictures of anyone else except myself, this includes my precious children. I don’t allow them to pick me up or have my address. And most importantly, I have one friend who receives all of the information on the guy when I go out on a date: his name, phone number, picture, his online screen name, where and when we are meeting.
It’s just one more option to show the universe that I’m ready…ready to find Mr. Right. As far as actual dates are concerned, it’s been quite successful. I haven’t met “the one” yet, but I’ve had 4 dates in one month, compared to zero the previous nine months. Whether I will find him by his picture sweeping across my screen or in the ice cream aisle at the grocery store, I’ve put myself out there. And that alone feels like a step in the right direction.

Image thanks to athree23 on Pixabay

Giving Ourselves Permission to Feel

Facing Fear with a Yoga Pose

Through dust beauty can grow.